In 2005, the Satellite Site of the Northern Virginia Writing Project was launched. Following the directive to "write what scares you" I chose to work through Dad's death in January of 2004.
I am grateful to my writing group who helped me work through my new position as girl without a Dad by listening to draft after draft of the scariest moment.  Not the happiest of Father's Day essays, but a moment we all face: losing a parent.

We sat in the waiting room with the walking dead.
My sister, my father, and I had come to Johns Hopkins cancer treatment center for Dad’s follow-up appointment.  We were to find out when the surgery would occur to remove whatever-it-was they found a month earlier in the ducts of his liver.
After the last hospital visit, he went home with a tube we flushed regularly for him that cleared his system of the fluids that built up.   Dad helped my sisters and I adjust to this new role—daughter as caregiver—with his usual humor.  Surgery was the next step, and today the adult children would coordinate the next phase of care. 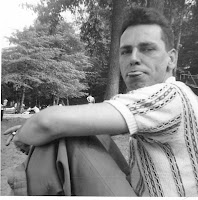 Posted by Mary Tedrow at 1:12 PM No comments:

Zombies, Ghosts, and Raised by Wolves: A Student View of Test Creators

Teachers aren't the only ones who are not asked their opinion about standardized testing in schools.  Nobody asks the kids how they feel about it.

My good friend, Susan, a Teacher Consultant in the Northern Virginia Writing Project, used the testing schedule as an opportunity to get some creative writing out of her seventh grade students.

Currently immersed in the testing season--which eats up an entire month in middle schools--(we must test every subject in every grade) and ties up technology and the library for the duration, gave her students plenty of time to think about audience.  A good writer (and test taker) should know her audience.

Mosey on over to her blog "A Year in the life of a Writing Teacher" and see what the kids have to say about testing and the test creators.  They provide illustrations too.

Awesome.
Posted by Mary Tedrow at 2:33 PM No comments: