Yesterday was one of those fun days when a whole lot of work pays off.  The Teacher Consultants of the Shenandoah Valley hosted a Young Writer's Workshop at Shenandoah University.  It wouldn't have happened without the support of the staff at the NVWP offices at George Mason.  Mark Farrington and his student staff did all the behind-the-scenes paperwork that gets the kids, parents, directions, fees, and publicity together.For overworked classroom teachers, that is the only way that an enterprise like this could take flight. Thank guys.
And Young Writers Director Erin Hubbard was the uber-organized leader of NHS volunteers, an accommodating schedule, and Teaching Consultants from surrounding schools that made the morning run with precision.
On a rainy, wet Saturday, 22 fourth through twelfth grade students trekked, sometimes from long distances, to pursue their interest in writing starting at 9 a.m. on a Saturday!  From nine to one they were prompted to record their imaginative wanderings and share them with their peers.
It's teaching heaven.  Rewarding work for those who often labor throughout the week before an unwilling audience.
And grown ups too, were a part of the fun.
Parents were welcomed to a free workshop on supporting their young writer.  Later they could sit in on a workshop of their own to develop inspiration for personal writing projects.
In the adult workshop, I found inspiration from my own prompts for a writing that has already begun to take shape.  Writing in a room of silent, scribbling writers IS inspiring.  In the summer institute, in my own classroom, in workshops, there is an energy that isn't matched when sitting solo at a computer all alone.  Writing in community is a powerful muse.
How does that work?   Hmmm......
Posted by Mary Tedrow at 9:16 AM 1 comment:

Ya Gotta Love the Numbers!

Bernie Madoff was once a respected businessman.
In fact, he was once the chair of Nasdaq.
It was his earlier reputation which shielded him from the kind of scrutiny that would have quickly exposed his scandalous Ponzi scheme where he duped his investors into believing that money was being made when, in fact, nothing had been invested at all.
In his defense, Madoff claims that the pressure to show quarterly gains led him to fake the billions he assured his clients they were earning.
A lame excuse, but at least it acknowledges how human behavior can be manipulated by the rules.
I see parallels in our current emphasis on proving student growth by distilling learning to sets of numbers.  Though we like to think that numbers don't lie, when personal fortune rises and falls with the numbers, it is a sure bet that some of those numbers will lead the public into a false sense of security that "Our children is learning."
Here's an example:
The math scores in one building were not showing gains.  The solution: at the halfway mark of the year, take all the students who are not showing learning gains (i.e. they are failing) out of the course.  Create a new course that repeats the first semester.  By renaming the course, these students do not have to sit for the spring state tests until much later.
Result: Big jump in scores that year because only students who are adequately prepared take the test.
Well, you say, what is wrong with that?  The students who aren't ready are given the opportunity to relearn the material, aren't they?  The scores jump. The school is no longer 'failing.' Our children IS learning!
Here's where I take issue with scores as a representation of true progress and gains in student learning. 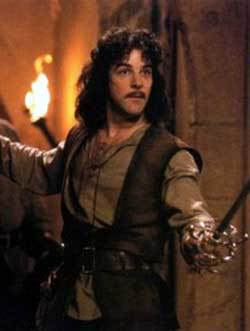 Like Inigo Montoya says to the Sicilian genius Vizzini in Princess Bride, "You keep using that word. ['Inconceivable' for Vizzini. 'Learning' for the rest of us.] I do not think it means what you think it means."
Scores did jump, but it was a deception played on the public.  Nothing was essentially changed except slowing the pace of instruction for some students.  As a result, many who struggle with math are doomed to repeat the same material presented in the same manner, or are subjected to mind-numbing drills designed to prepare them to pass the test.
True reform would exhibit itself in helping teachers locate new ways to engage students who struggle.  And there ARE new strategies out there.  But it would take time for teachers to re-think, re-learn, re-tool an entire course.  No time and resources were part of the scenario described above.
It would mean spending money on professional development for teachers, helping them help students find a way into and through the math puzzle.  No money for that.
But enormous pressure, along with piles of money spent on the bubble tests, must show immediate progress or heads are going to roll.  Desperate people do desperate things.
YOU do the math.
So, what happens to students who must sit through math again?
I envision my recurring nightmare: I have missed a course in high school and they drag me out of my current life, back to my old school to take the WHOLE YEAR OVER AGAIN.  In the dream I am panicked and disheartened.  My whole life is disrupted and, on top of all that, it's boring me to death because I know I can do the work in a week!  But they won't let me!  I would drop out, but I know it would be the death of all my hopes.  The whole dream is bathed in an overwhelming feeling of asphyxiation.  I can barely breathe and wake up in a sweat.
Well...  Some of our kids do drop out, anxious to get on with some kind of life outside of school. Who can blame them?
Our current love of data extends beyond those we consider left behind.  Students in upper-level courses are distracted by numbers represented in SAT scores and fall into a single-minded obsession with high grades in order to compete for colleges.  It perverts their thinking.  And -guess what?- sometimes they cheat.
Just like Bernie Madoff.
Should we hold teachers (well, the whole system, really) accountable?  You betcha.
How can we do it in a way that honors both teaching and learning?
Some teachers have made suggestions.  Check out this plan formulated by the teachers in the workforce and a part of the Teacher Leaders Network.
Let's get honest about what we are hoping to do and be sure that everything is being measured - including our support for true learning.
Posted by Mary Tedrow at 10:41 AM 4 comments:

I'm a terrible worker.  Can't write until the house is clean (how often does that happen?)  Can't blog until my TLN pages are caught up.  (Those thoughtful teachers have been throwing big ideas back and forth at a rapid pace lately and I can't keep up!)  Can't move on to a new subject until I've dispensed with the last.  Can't write emails until I empty my inbox.  No wonder I'm behind in posting.
And that's my problem.  Good friend and blogger Nancy Flanagan threw out a 20 question meme based on the FaceBook challenge to reveal 25 things about yourself and the questions have been sitting there until I can summon the time (see above problems) and answer them.
I give up.
The questions are too thought provoking.  I think too slowly to get to them all.  So here's the ones I can manage as a block.
Been teaching English since 1978, (first year was a long term sub gig teaching five classes of math. Guess who learned the most?) with a twelve year break raising my own kids.  I have taught exclusively at the high school and have hit every grade, every skill level from self-contained special ed to Advanced Placement 11 and 12.
My professional development book is hard to pin down.  I remember being transformed by Ken Macrorie's I-Search book.  Mostly because it turned the whole teacher/student paradigm upside down.  But more than that, it was the English 695 course from GMU that did the trick. Led by Marian Mohr and the Teacher Consultants of the Northern Virginia Writing Project it was the ONLY professional development course notebook I searched for when I went back to teaching in 1994.  Took that class in 1981.  Don't know why every teacher isn't teaching that way yet.  We should have been on to those best practices long ago.
My best teacher buddy continues to be the one I consider my mentor: Theresa Manchey. Intelligent, thoughtful, kind and nurturing, I want to be like her when I grow up.
Best administrator: hands down Don Shirley.  He was the first principal I had and I didn't know any better to appreciate his gifts.  He fiercely protected teacher time, never calling unnecessary meetings or asking for paperwork that would sit in a cabinet somewhere.  He trusted us.  It was clear he loved the kids and the teachers who worked with them.  The school was a fun place - most of the time.  He has (retired now) an impish sense of humor, and I still remember many of the inside jokes the whole faculty shared.
Most disappointing experience:  Ugh.  Too disappointing to share here.  In general, when those in power lack the courage to defend good instruction.  Happens too often.
Favorite class to teach: Any journalism class.  I knew those kids extremely well.  We generally became friends.  The work was real to the kids.  Their writing grew exponentially.  Whole groups of them went to college and worked on their papers there.  Several have become writers as adults. Much satisfaction all around.  Not teaching journalism now because of the disappointments referred to above.
Most thrilling moment: The day two former students sent me the article they collaborated on during the Kerry campaign.  They'd traveled to Boston for election night coverage while students at UVA.  One student had the byline for the photography, the other had the byline for the story.  Proud momma moment for sure.  That they would think to share that with me was the biggest thrill.  But we move on, hoping for more moments like that.
Unions aren't allowed in Virginia, but I wouldn't enter a classroom without the protection of our association's liability insurance, lawyers, and the ongoing lobbyist at state.  Seen too many teachers abandoned by their district to take on the risk of a lawsuit by myself.  Been too busy in the classroom to follow legislation.  I'm glad someone is paid full time to protect our interests.
How would I spend $5 billion?  Can't hardly imagine the sum to begin with, but I would make teacher professional development a part of the job.  Free up time to get teachers together to work on lesson studies, improve instruction.  I think it would make the whole school program more humane and would affect student learning exponentially.  It would mean "buying" more teachers so the face time with kids could be reduced.  Of course, first we'd have to convince all of America that working REALLY HARD all the time (represented by long hours on weekends and all night and etc. etc.) isn't such a good thing - for us, for our kids, for our families.
Finally, the last question I want to answer is about a personal education hero.  I have known many and have continued to work with many on a daily basis.  But, for me, the one who has expanded my understanding of policy and teacher work continues to be Nancy Flanagan.  She always has her ear to the ground, knows all the players and their interests, and is willing to share that knowledge.  She's been a relentless champion for truly professionalizing our work, a goal I hope to live to see.  Thanks, Nancy, for the free information and keeping the lights burning.
Posted by Mary Tedrow at 5:51 PM 1 comment: