Sheridan Blau's The Literature Workshop has been sitting on my shelf for several years.  Two weeks ago I toted it along on a driving vacation.
This was definitely not a beach book. 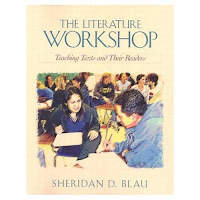 Anyone who considers teaching as a profession for lightweights will be disabused of that after a read through Blau's carefully crafted and supported pedagogy for lifting students' reading, writing, and thinking skills to the next level.  (I became intimate with three new terms: hermeneutic, fallibilism, and desiderate: all of which I now understand thanks to Blau's careful elaboration.)
The book is built around a series of workshops Blau regularly conducts with students, teachers, and pre-service teachers.  I recognized one I participated in at a recent NCTE convention.
Though teachers can follow the instructions and recreate the workshops in their own classes, as I hope to do, the real benefit is in the argument supporting the methods.
Central to Blau's thesis is the idea that traditional literature classes consisting of lectures on important works merely offer students an opportunity to take notes on another person's read of a text.  This sends the double message that some texts are impenetrable to average readers and that the student must rely on more accomplished readers for interpretation.  Blau's goal is to engage learners in the work of struggling with and interpreting text independently, hence his workshops that lay bare many of the skills that accomplished readers must access in order to make sense of difficult text and form fresh and cogent readings of their own.  Though texts are important to the workshops, the real subject is the reader himself.
The National Council of Teachers of English awarded Blau the Richard A. Meade Award for Outsanding Research in English Education for this 2003 publication.  And with good reason.
Each activity is well-researched and presented with such logical clarity that it would be difficult to escape the idea that time spent on close reads of intellectual thought (rather than texts) is a worthwhile use of classroom time.  However, there is no area of English practice where he will not threaten the traditionalists.  His research paper, for example, employs other students in the class and their papers and discussions as the cited sources in lieu of established critics of literature.  In my opinion, a brilliant solution to the wooden papers where students attempt to incorporate the voices of academicians and that also supports his philosophy that students are not incapable of developing their own interpretations.
Most refreshing are Blau's admissions of personal weak readings or classroom blunders.  And in a nod to the inspired work of effective teachers, Blau argues for sticking with a practice that seems to work -- as he did with his own habit of encouraging the 'pointing' to text that resonates -- until the underlying reason for its success in student achievement is revealed, rather than awaiting a theory to then develop into practice.
I'm sorry I waited so long to read this (though I could only take in one chapter at a sitting, so rich was the  train of thought).
I plan to experiment with several workshops as I continue my quest for a classroom that's an engaging place of authentic inquiry.
Posted by Mary Tedrow at 10:00 PM 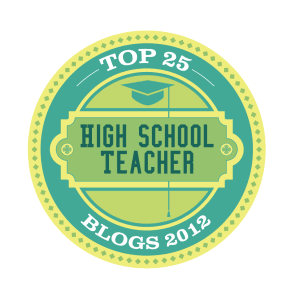 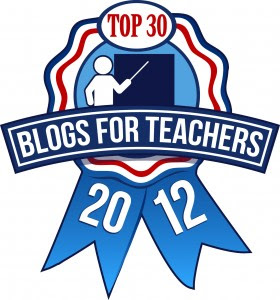